Tomorrow is WORLD SUICIDE PREVENTION DAY and Canada has a crisis.

Suicide is the second leading cause of death for Canadian youth aged 15 to 34. Only motor vehicle accidents claim more young lives.

A 2016 Kids Help Phone Canada-wide survey revealed that suicide is on the minds of more Canadian teens than we might imagine, and many are not seeking help because they don’t know who to turn to.

Twenty-two per cent of Canadian teens (aged 13-18) surveyed by Kids Help Phone said they had seriously considered attempting suicide in the past 12 months. Of these teens who had considered suicide:

Talk to children about suicide. Asssure them suicidal feelings are temporary and having these feelings does not mean they are bad, weak, or insane; it means they are overwhelmed. It means they are carrying more than they feel they can bear. It means they need help, and you will help them get it. Because children have the right to health, protection, and life. 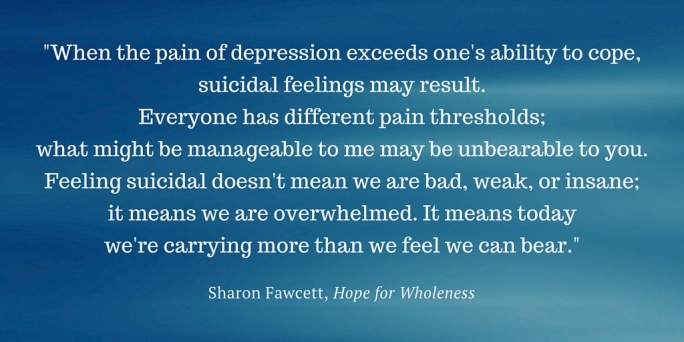 Suicide prevention: What every parent needs to know

Sharon L. Fawcett I am a compelling communicator and advocate with an unrelenting desire to better the world by generating awareness of human rights-related issues and inspiring action. I offer experience as a writer, published author, and public speaker, as well as knowledge gained through academic study and work with humanitarian and advocacy NGOs. Proven to be highly motivated, efficient, and dedicated to producing excellent work, I am driven by my passion for human rights, desire to promote the dignity of all people, and love for creating and communicating.
Published September 9, 2016September 9, 2016

3 thoughts on “World Suicide Prevention Day: Canada has a crisis”